How fun can running be?

Every year before Christmas there is few runs where you get to wear your Santa clause outfit and run! Few weeks back I heard of the Q music Santa Run a 5.5 km race in Ijstelstein which is not too far from where I live. I got all excited but the only disadvantage of that run that it is on a Thursday evening which means I have to work a full day before I can get to run.
At first I was going to run with Falko who won the race last year but he was not feeling well on that day he had to cancel. On Thursday it was raining so hard and I had a Birthday Party in the evening. The combination made me a little hesitant but with some self motivation I decided
to Just Do IT!!

I left work a little later than I wanted, due to meetings and rushed to Ijstelstein, I arrived 15 min before the start of the race. I parked my car and run fast under the rain and picked up my start number and my Santa hat. I bumped into Ans who was also going to run with some friends. After a small chit chat with her I headed to the start. The atmosphere was very nice with music, a stadium and warm up drills... 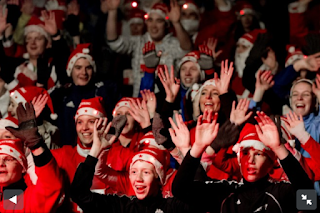 At 18:30, the dutch artist Isle Delange fired the start gun for the Q- Santa run. I started running and after 1 km I had to stop because car were driving and no one was stopping them but  then started running again. Despite the stop,  I enjoyed my run so much along the road people of the town were cheering up.
Before I even think about it I was already at the finish line. I crossed the finish line as a 1st lady from about 150 SantaWomen and 19th overall from 406 SantaRunners with a time of 23' 44.
With a big smile, from the finish line , I drove fast to my house, got refreshed and headed to the birthday party! That was a busy day but just being able to combine everything gives me a self satisfaction feeling but also I would never been able to do it without the support of my big fan!

TwitRun
TwitRun is a run with runners that maybe you have met before or maybe not but you know each other via twitter and share the same passion:Running! In the past I read about twitter run here and there but I never got the chance to attend one.  I got via facebook an invitation from Wendy and Martin couple weeks ago and manged to make it this time.
At 10:00 I met with other 17 TwitRunners in Heemskerk a town where I have never been to. Martin makes a speech and explains that a group will run about 10 km with Annelies as a guide and another group about 15km with Martin as a guide.

I chose to go with the 15 km group. Martin made sure to work us out but no one was unhappy because you still can run your own pace. He took us on a beautiful road in the woods with uphills and downhills toward the sea. Once we climbed the last hill and got the the view of the sea, I got speechless...it is so beautiful!! The sand was not super hard so it made me worry about my knee but thanks god I almost didn't feel anything, the wind was blowing the direction we were running so this made it even nicer to just run and run! The sound of the waves, the cracking sound under my feet and the breeze of the wind blowing in my hair  made me daydream!! I simply loved it!! After 2.5 km on the sand we met up with the other group took a small picture moment and headed back to the starting point.

I was almost sad it was over, I was already asking when are you we coming back again?


At the parking I changed into something dry and warm and went to have a cup of coffee with everyone else.

Thank you Wendy and Martin for organizing this event! 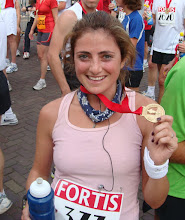